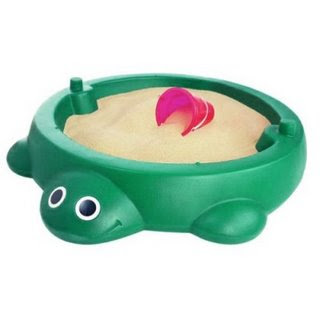 You know, nothing is ever as easy as it should be. We figured that the kids were old enough to handle a sandbox this year. So, last Sunday, Kevin filled it up with sand. Simple enough.

So we laid down the LAW. No throwing, no putting it in each other's hair etc. The first day they could play, Charis was the offender. I caught her dumping it on one of the other kids. She had to come in. For the rest of the day. Just this side of capitol punishment in Ris's mind. Everyone was outside, and she kept asking to go out, too. Thinking I would use this as a 'teaching moment' I stuck to my guns. Each time explaining patiently why she had to stay inside. Even when she asked 'WHY?' five hundred and sixty eight times!!

The next day, no problem. I just forewarned them again what would happen.

Yesterday, the four oldest kids were out back playing. Ella was exhausted and throwing an "I AM AN EXHAUSTED THREE YEAR OLD" fit. It was lovely.

Anyway, Kevin looks at back to see ALL 4 children dumping sand on each others' heads. Now be honest, I kind of expect it from the 4 year olds. I mean, ya gotta check out those limits, right? But the 9 year old? The 6 and a half year old?? So now, our sandbox looks like this.....

Actually we are considering putting the sand back in.....and banning the big kids from it!!

Our 7 Blessings from God said...

LOL! I had to laugh at this- I just had to get onto my 13 year old this morning for throwing rocks in the playground. I explained to him that it's hard to get the 3-5 year olds to stop when he's doing it, too!!

Oh my!!! We have a sand table so it sits off the ground about a foot and a half and it only takes Em about 1 minute to dump it out completely. Needless to say we haven't filled it yet this year.

Hopefully the novelty of throwing the sand will pass and all will be right with the backyard again soon!

My son has the same turtle sandbox, and every year he manages to get more sand outside of it, on the lawn, and my husband freaks out. Meanwhile, I'm the one trying to put the sand back in the box. It never works. :)

I love that your daughter's name is Charis. When I was pregnant I had the same name picked out for a girl, only spelled "Carys". It's such a great name!

I had a sandbox when I was small. My father built it for us, about 6x6 feet, I guess, and he built a teeter-totter and a swingset with monkey bars. I'd pile ALL the sand on one side of the sandbox with my handy-dandy dumptruck. And the next day? Pile it ALL on the other. Drove my parents crazy.

We have a tugboat sandbox. We fill it every year. 300lbs of sand goes in....and by August....300lbs of sand comes out! I have laid down the law each year and I have found that the best way to get my point across happened last summer....my rule is once the sand is gone....it is gone...I do not replace sand midsummer...so last year about the first of august...the sand was down to about an inch or so in the bottom of the sandbox....the kids protested and I just reminded them...no more sand until next year. They are already telling each other they have to be careful because if they dump all the sand out "Tracy" won't buy anymore!!! We will see.....

Hmmm.....well I was just thinking that if we get Kaylin a sandbox, we might not know how much sand was in the box cuz there's already sand on the ground! HA! So, I'm not gonna be able to tell her don't throw sand on the ground when she's already standing in the stuff!!! :) Glad I thought of that one ahead of time!! As for your kiddos, well, here's hopin' they grow out of throwin it!