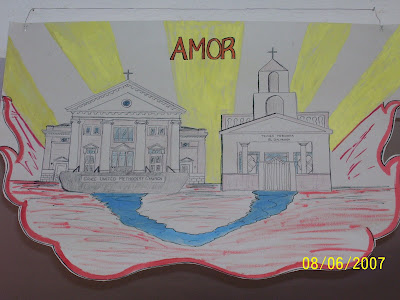 This is a banner that was made by the pastor of our sister church. Pastor Jose made this sign to show the river of love that runs between the 2 churches. Amor is the Spanish word for LOVE.

Our first day on our mission we spent the afternoon with the Jose and Yamile and his family at his house. The homes are one story and made of cinder block and concrete with flat roofs. This helps to protect them from hurricanes. The hospitality we were shown was absolutely amazing. We were on a mission trip to serve and felt that we were the ones who were being served. Pastor and his wife had a gift for Kevin and one for me, as well as one for each of our children.

It was such a blessing to meet these people that I have heard about for 9 months. There was an instant bond that is impossible to describe. I felt like I had known them my entire life. Even though we spoke different languages, the Holy Spirit was so amazing!! We had an amazing interpreter. A 16 year old named Lisi. She has pretty much taught herself English by watching tv and listening to music. She was a riot, but more on that later.

The first night we went to the church and met the church community. What amazing people. So welcoming. We had the best fried rice EVER for dinner. And to make it special, each family from the congregation contributed one ingredient to the dinner. There was also fresh cucumber salad and fruit punch.

After dinner we played games. Grace Church vs. our sister church. It was so funny! We played charades, musical chairs, capture the flag and there was an eating contest. Mike Clemmons and another gentleman had to race to see who could finish a bowl of fruit and juice fastest. No hands. They were both down on their faces like dogs, slurping it up! Mike won!! What a talent, and what a good sport.

We got to see the blueprints to add a bathroom to the church. Our church is helping to fund that. They are also planning on putting a roof over the roof top as they use that for classes.

I have so many pictures and will be publishing soon!

Because He Lives
Tonni